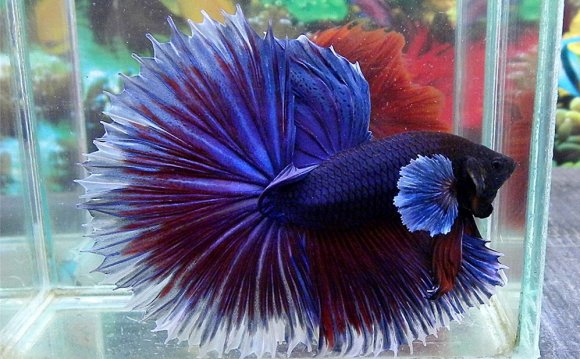 All text and photos belong to the author and first published on Ultimate Bettas and re-printed with kind permission of Surat Bhutipanya for World of Bettas. Translated by JaiYenJohn

One day in the middle of 1999 Uncle Sala and Natee found a very large plakat on their farm, it was an incredible four inches long! They came up with the idea to breed the regular forms and colors of Betta, but try to make them as large as possible. They were excited that this would be an entirely new form of Betta Splendens. This would of course be good for their farm, but also for the Betta community at large. So they looked through their farm's 300 round cement tanks, to find the largest female Betta to breed with the original huge fish they'd found earlier.

After the first generation of fry, they found only a very small amount of large fish. But they selected the biggest of those and bred them again. After each generation they found they were getting more and more large sized fish in the brood. They started breeding new broods every week, some weeks as many as 50 pairs of fish at a time! They began switching the males and females from different large sized lines together to create strong colors, and to prevent inbreeding.

By 2001, Uncle Sala and Natee had several strains of large Betta, both plakat and long tail varieties. At this time they first brought them to the market to be sold. They named them Giant Bettas (Plakat Yak). It didn't take long before word of these new giants got around, and people began buying them for breeding and for show.

In 2002, Uncle Sala and Natee sent some of their strains of Giant Betta the United States for an IBC competition. After that, the word about Giant Bettas really took off.

Just as things were going well, in 2003 something unexpected happened. The lease for the land they had their fish farm on had come up for renewal. However the landlord refused to rent it to them again, as he wanted to sell the land for a very high price. So unable to afford the land themselves, Uncle Sala and Natee paired down their farm from 300 tanks to only 70, and moved those into their homes. During this time the breeding of Giant Bettas became slower more difficult.

But they never gave up, and even though they made much slower progress they continued to develop their fish producing some stunning new colors of Giant Bettas.

In 2004, Dr. Gene Lucas visited their farm, Uncle Sala and Natee were honored to have a celebrity in the world of fish breeding take an interest in their work. They were also delighted that Dr. Lucas was passionate enough about Bettas to come to Thailand to see where Betta Splendens originated.

As of now, Uncle Sala and Natee are still breeding both Giant and regular sized Bettas on their farm. We continue to develop new colors and types of fish, specifically for people who love Bettas.

To breed your own Giant Bettas, simply pick the largest male and female fish you have. Once they've bred pick the largest male and female fish from that brood, and pair them. Continue doing this until you have a high percentage of giant fish in one brood. After that, take your Giant Betta and breed them with other regular sized fish to create whatever colors and fin types you wish.

Now that there's a lot of Giant Bettas on the market, it's a lot easier to breed them than in the past. To succeed in breeding Giant Bettas, and have a large amount of big and beautiful fish in one brood, you have to choose the giant fish from a good family. Start with a fish that's big, and beautiful and the right age. After that, it's up to the experience of the breeder.

The Giant Plakat Bettas that myself, Uncle Sala, and Natee are breeding used to be about three inches long (from mouth to tail) at the age of eight and a half to nine months. But now we can breed them to hit 3 inches in only five and a half to six months, and sometimes even as early as five months.

I've tried to think back about the breeding and development of the Giant Betta from the beginning till now. But I fear that I can't recall all the theory and trial and error, because I've bred too many giant fish to remember all the steps involved. And I believe that there's no one theory that can give you Giant Betta fry for sure every time. Will you get the baby giants that you're looking for? I think it mostly depends on your experience.