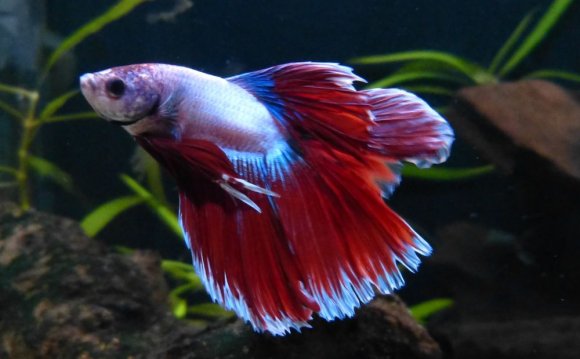 These are typically long finned Bettas, though there is some breeding of short fins currently going on, where the webbing on the fins is reduced. This makes the rays extend outward giving a unique look to the fish. The better fish have a huge reduction and rays that are long and straight. These fish are prone to ray curling in reaction to water conditions.

Short-Fin The betta started out out with short fins. These fins are still found on wild type bettas today. The short fin fish have also been selectively bred to have tails shaped in the "D" shape of their longer finned Halfmoon relatives as well as the traditional wild type fins. Many also call these fish fighters, as the short fins are the ones selectivly bred to fight.

This is another term for short finned Bettas. The term plakat comes from the Thai word Plakad which means fighting fish. The plakad can be wild caught fish or those bred in captivity. The wild caught fish originally came out of rice patties in Thailand and Southeast Asia. They were then bred for their figting abilities. Qualities bred for in Plakats are strong bodies, large jaws and small fins. A fighter with small fins will suffer less damage when paired with another male to fight.

In Thailand, both the long finned and short fined bettas are called Plakat Thai. They refer to the short finned specifically as Plakat Morh and the common long finned variety as Plakat Cheen which translates to “Fighting fish from China.”

This is the fish that has been found in pet shops for years. The fins are long and flowing and the tail arches up and over like a veil. Though this is probably the most popular aquarium fish of all times, this tail type is not a showable fish in IBC competitions.

You will see this term used on the auctions of AquaBid. Since a single tail Betta with a 180 degree tail spread is referred to as a Halfmoon, it is reasoned a double tail Betta has two halves or half moons, making it a full moon. It is still just a double tail betta and the term is creative marketing...

The Halfmoon Betta has a tail with a spread that is at least 180 degrees. Any tails spread that does not reach the 180 degrees is referred to as a Delta. Ideally the Halfmoon tail should look like a large capitol "D", or a half of the moon or circle. This tail type can be found on both long fin and short finned bettas.

When you see this it is talking about the Halfmoon tail spread. To be a Halfmoon there must be at least 180 degree spread between the top and bottom tail rays.

Not every fish from Halfmoon parents will get a tail spread of the 180 degrees. Some get almost there and stop. These are called Super Deltas. Wide tails that do not get close to the HM or 180 spread are just Deltas.

These fins are different in shape to the traditional veiltail as they do not have the arch and droop of the veiltail. They are branched and shaped like the halfmoons, just fall short of the branching needed to make that 180 degree spread.

When a tail spread gets to the 180 mark, the fish is termed a Halfmoon. But in breeding for that kind of branching and tail spread there came fish that had a spread exceeding the 180 degrees. These fish were termed Over Halfmoon, in other words, tails having more than 180 degree spread in their tails.