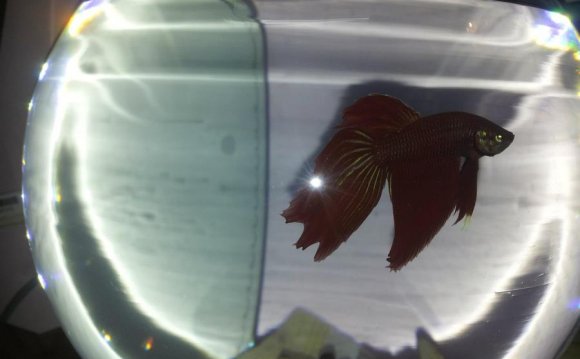 The betta fish was one of my first patterns I ever drafted entirely on my own with the intent to sell. This was back in 2012 before I even owned a sewing machine and much of the original pattern was designed to be hand sewn.

Here's one of the original fish, wedged into a sandwich, just for nostalgia:

Obviously a lot has changed since 2012 and the method I use to sew fish is entirely different. I now utilize a great deal of top sewing to make the fish rather than stuffing many fins in the tight confines of the body. The pattern also got some quality of life updates in line with my newest standards for my patterns which I put in place with the whale shark pattern.

Rather than give a generic rating of beginner, intermediate, and advanced I've expanded to a 10 point rating system of difficulty. This allows for a bit more room to describe the difficulty because there's a great deal of difference, for example, between someone who is a beginner and has never sewn a single thing in their life and someone who is a beginner, but has made one or two plushies and knows how to use a sewing machine. My hope is that a 10 point system will allow people to more accurately choose patterns for their skill level to avoid any disappointment or frustration when they pick up a pattern only to find it is too difficult.

My next change is minor, but may prove to be very helpful. I now include an approximate measurement for the required materials.

Previously I did not include fabric measurements as it didn't seem to matter to me. Rarely can you buy the exact quantity of fabric needed and even 1/3 of a yard (the smallest most places will cut when selling by the yard) is generally enough for any of my plushies. But I realize now that there is a great many holes in this logic. What if a customer is trying to gauge if they have enough scrap fabric left? Or their local store will cut exact amounts? What if they want to calculate how many they can fit on a yard? There are so many reasons someone may want more exact measurements beyond just initially buying a 1/3 of a yard of fabric and calling it good.