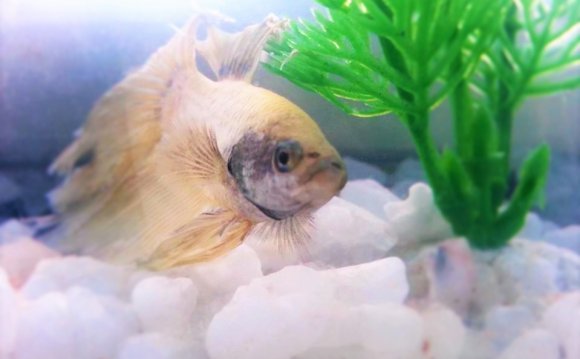 Female Bettas don't receive the same attention as their more glamorous male counterparts. In fact, the only time female Betta fish are valued is when it comes time to spawn.

Is there any difference when caring for male and female Bettas? Mostly, no, but there are a few you should know, especially when it comes time to breed. Below, we listed the Betta care basics for males and females. But, pay special attention to the tips on caring for a female.

• Plants (natural or plastic or a combination of both) that mimic the natural habitat of Betta fish. NOTE: Female Betta fish like some privacy, so don't skimp on the plant life, but don't make the area so dense that she can get tangled in the plants either.

• Cover your tank. Betta fish have a reputation for jumping so a cover can help prevent any accidental escapees.

• A proper filtration system that oxygenates the water but doesn't pose a threat to your Betta. Keep in mind that Bettas are accustomed to stagnant water in the wild, so a rapid filtration system not only can catch fins, but may also startle your fish.

Although it may seem a little quirky, male and female Bettas have distinct personalities. When breeding, take some time to allow your Bettas to get to know each other, for they must be compatible to ensure success when breeding. To do this, put them in the same tank, but place a glass partition between them. This will serve to get your male and female Betta better acquainted without inciting violence. Also, while they are in the same tank, but separate, feed your Betta live food at the same time. Think of it as a romantic dinner and you will be helping to set the mood.

Finding female Betta fish that are good mates can be a tricky process. Male Bettas seem to prefer females with a red color and are not attracted to yellow Bettas. However, not all personalities mesh well together so be prepared if your male and female Bettas don't mate.

What to Look For in a Healthy Female Betta

Female Bettas make the best breeders when they are in good health. If a female has been ill or had a disease, wait until she is better to introduce her to the tank as a potential romantic partner. Sick female Bettas may have a delay in laying eggs. If they do lay eggs, the resulting offspring have the potential to suffer with developmental issues.