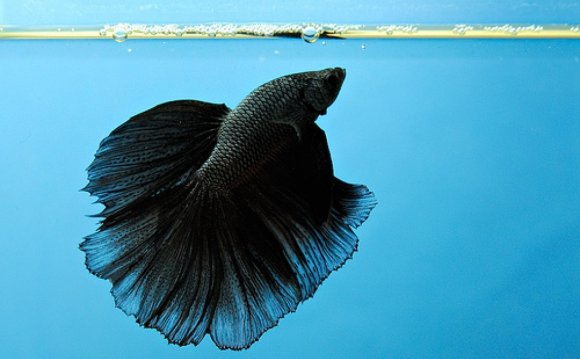 You can find betta fish sitting quietly in tiny cups on the shelves of pet stores everywhere. You may feel like rescuing a bunch of them and plopping them in a larger tank together, but you’d better be sure you get only one male, or they’ll fight to the death.

One of the most obvious and distinguishing features of the male betta, also known as the Siamese fighting fish, is his color. The males of the species have bright colors; the females tend to be rather plain, almost mousy, with dull-colored fins that match the colors of their bodies. The boys come in just about any color you can think of, and their fins often are a bright color that complements the fish's overall body color.

In addition to their many bright colors, male bettas typically have long, flowing fins and tails. In some of the more mature Siamese fighting fish, the fins can be so long that they inhibit the fish’s movement. The males seem to recognize other males by the presence of these oversize fins; they'll even challenge other species of fish if they have big fins. Male fancy guppies don’t do well in a tank with bettas for that reason. Male bettas may also attack angelfish and some types of mollies. Female bettas have shorter fins with an overall rounded appearance.

Male bettas are well known for their aggression towards other males; they'll fight any time they come together. This is the reason behind keeping these fish in all those tiny cups, since the males can’t share a space, even for a little while, without having a serious fight. If you have a betta and you don’t know for sure if he’s a male or not, put a mirror where he can see it. If he flares his fins and challenges his reflection, you’ve got a male. Females may sometimes nip other fish but typically do not do any of the posturing and flaring that the males do.

Males tend to have larger and longer bodies than the females do, and they're skinnier. Their fins and tails are larger. You might find it hard to compare the body size of a growing fish to a mature adult, but it can be very helpful when you’re trying to sex immature fish. Bettas don’t show a lot of fin development until they’re around 8 weeks old, so the body type can be an important way of telling them apart. The female also has a tiny tube, called the ovipositor, visible on the underside of her body.