What do Baby Betta fish eat? 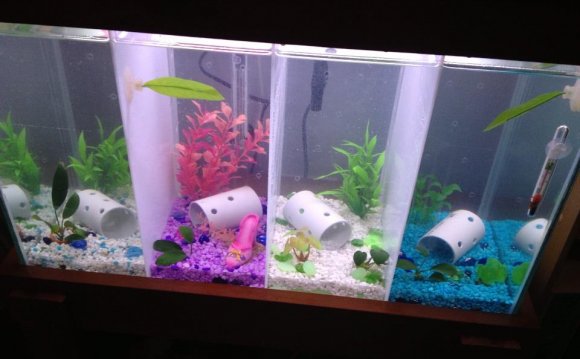 By Nes Durand,
Reprinted by Permission
Spawning
Spawning may take hours or even days after release - so don't be discouraged when you don't see them the first time (though checking on them a few hours after lights-out, being really quiet & lucky will often get you a sneak peek).
During breeding the male displays to the female then shows her the way to the nest, if she's ready she'll follow him. The first time she may come under the nest, inspect then swim away a couple times.
When they are both ready the male will flare up HUGE (very impressive!) and will start to circle the female, distracting her by shaking his tail. Once he's got her positioned he will attempt to flip her upside down, and drape his own body over her in a u-shape - then squeeze.
It may take first-time spawners QUITE a few times to get this right.
Both partners will be stunned at first. After releasing all their gametes into the water, the male recovers first & hurries to pick up as many of the falling eggs in his mouth as he can. After up to 30 seconds the female will recover then either help or hinder his progress.
She may even swim away. It's very scary to see her stunned the first time - but don't worry I don't think a betta has ever died of pleasure.
Removing the female
You'll know it's time to remove the female when:
- suddenly her belly is much deflated.
- the male is aggressively chasing her away from the nest and adding more & more bubbles. He's probably also tending to the eggs - picking them up and cleaning them then moving them around & eating all the unfertilized or fungusing eggs.
Babies are Born
3 days after spawning the baby bettas will start to emerge from their eggs, the babies look like 2 little black dots with white tails. For the first day or so they will be falling out of the nest & dad will go pick them up and put them back in.
2 days after the fry emerge (5 days after spawning) you should remove the male unless there are still a lot of fry in the nest. At this point the fry should be swimming away to go hide from him before he gets any smart ideas. (Well, he hasn't eaten in a few days and men do travel on their stomachs...)
Feeding the Fry BABY BETTAS ONLY EAT LIVE FOODS
Hopefully you would know this ahead of time & get some cultures from your local breeder.
Bettas live of their eggs sacks for the first 3 days but it's good to introduce very SMALL amounts of food to the tank a day after they emerge from the egg so that the big guys can start eating right away. Remember, baby bettas are really small and are filled-up very easily, feeding too little is a little better then feeding too much - you don't want to spoil the water or you'll lose everyone.
A good starter meal is:
Week one
- infusoria
- vinegar eels
Week two
- vinegar eels
- microworms
Week Three
- microworms
- baby brine shrimp
Week four
- microworms
- baby brine shrimp
- brine shrimp
- dried food
Week five
- microworms
- brine shrimp
- dried food
Week six
- brine shrimp
- dried food
- pellets
If the babies eat too much their swim-bladders won't develop properly and you'll get belly-sliders (fry that can't swim), lightening up on feeding usually helps
Water Changes
The babies should be ok in the 10 gallon for the first 2 weeks. Since you were smart and only had a few inches of water in the tank at first you can easily add more fresh water with out taking any out!
MAKE SURE the temperature of the new water is EXACTLY the same as the water in the fry-tank or you'll lose babies. Drip the water in using a small cup & some air-tubing.
After two weeks transfer the fry into a larger tank by carefully floating the old tank in the new tank or transferring them one at a time via turkey baster or very carefully pouring them in. Again make sure the water is exactly the same quality.
During this time you should use a sponge filter because they don't suck up fry. There are other contraptions you can make but I like sponge filters.
In the new tank you'll still have to do changes & the fry are still small, just use a little air-line hose to suck up all the crud off the bottom, if you get a belly-slider on the way don't sweat it that was a weak fry.
You can also add snails or dwarf cory at this point. Supply them with extra food but they will help keep the tank clean & won't get any fry that weren't going to die anyway (you gotta be pretty darn slow for the snail to get you!)
Grow out tank
This is the second tank your bettas are placed into (sometimes third), it's the one they'll stay in until they are 3 months old. The size really depends on how many bettas you want to raise and how big the spawn is.
A 30 gallon will give you 20 - 30 fry (or so)
A 50 gallon will give you about 100 fry (or so)
And a 100 gallon can raise an entire 300 fry spawn.
After 3 months the bettas will start fighting and the males will start trying to court the females. At this point you remove the males, put them into juvenile cups (32 oz usually) and sell 'em!
This has just been a brief overview of Betta Breeding, there are a lot of different opinions on technique, mechanics, feeding -well anything you could possibly fight over.

Petfish uses no advertisements, we depend entirely on donations.