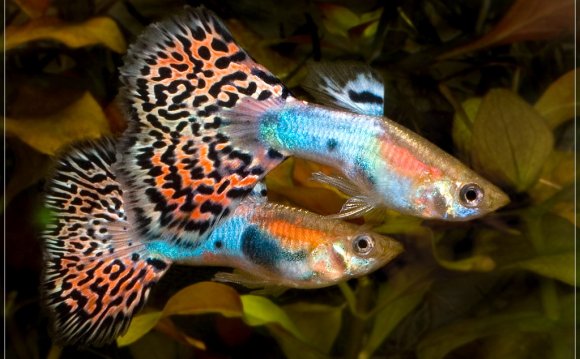 Home to over 1500 different species of tropical fish and other variants, the Great Barrier Reef is an incredible natural location teeming with life. From the smallest kinds of bait fish up to some of the largest varieties of sharks on earth, the environment of the Great Barrier Reef is home to those on all ends of the fish spectrum. The sheer volume and density of fish varieties which can be found within a small area make the reef a diver and snorkeler‘s paradise, as it is not uncommon to encounter hundreds of different species of fish within a single, relatively small area of ocean. Despite the staggering quantities of fishes that dwell within its waters, the fish of the Great Barrier Reef are divided up in to surprisingly few main families, each with significantly differing characteristics that mark the difference from one family to the next. There are several main factors that signify each major group, including (but not limited to) their size, colour, shape and behaviour. Thus, the major families of fish species that can be found in the waters of the Great Barrier Reef include:

Known for their distinctive shape and often strikingly colourful markings, Angelfish are one of the more numerous species of fish in the Great Barrier Reef, with over 80 different species in the family in total. Typical characteristics of the Angelfish include their beauty, inquisitive nature, and tendency to be found in all levels of the upper reef, from the surface to the base of the area’s coral formations. Patterns which can be found on Angelfish range from thin, vivid stripes to multi-coloured speckled patterns that make no two fish of the families look exactly alike, and they form a bulk of the subjects for underwater photography for enthusiasts on the Great Barrier Reef.

A close relative of the Angelfish, Butterfly Fish share many physical characteristics but are typically distinguished from Angelfish due to their more elongated, thinner “noses” which tend to jut out from their main body. Similarly vibrantly coloured and patterned (with the dominant colour usually a bright yellow), they add yet more colour to what is already a vivid tapestry of rainbow-coloured marine creatures. The bodies of Butterfly Fish are very thin, which help them navigate through smaller passages so that they can dine on their usual diet of coral polyps or algae growing on the reef.

Butterfly Fish are also known for being incredibly loyal to their mates, and stay with them for life.

A small, elusive species, Cardinal Fish have large eyes and mouths for their size and are notable to having their dorsal fin separated from a single protrusion into twin fins, a relative rarity among reef-dwelling fishes. Cardinal Fish are nocturnal and typically bury themselves within gaps in coral or caves during the daylight hours before emerging at night to get their fill of their typical shrimp and crab based diet. In terms of coloration, those of the Cardinal Fish are often relatively inconspicuous (such as the common Pajama Cardinal Fish), especially in comparison to the gaudy colours of most of the reef’s other inhabitants; this is a contributing factor to their ability to evade the many larger predators that inhabit the same waters.

Also known as Anemone fish, Clown Fish have recently sprung to international fame due to providing the basis for the starring character of Disney/Pixar’s hit CGI movie Finding Nemo. Anemone fish are extremely popular with the diving community, and Clown Fish in particular are characterised by their highly recognisable markings, typically with a bright orange colouring coupled with a glowing white or light blue band.

Their habitats are the sea anemones from which they derive their name, having built up an immunity to the otherwise poisonous tentacles of these soft ocean plants via coating themselves in a layer of mucous. This in turn acts as a natural defence system against passing predators, as the Clown Fish can nestle itself amongst the anemones which will poison any overaggressive threats to the fish – a truly symbiotic relationship. While they are small in size, Clownfish are also popular for being one of the most accessible species of fish in the Great Barrier Reef due to their tendency to inhabit shallower waters, making them often visible by snorkelers without needing to dive down further into the reef’s depths.

From stunning bright colours to drab, muted hues, Damselfish are so numerous that they range from all ends of the spectrum; as one of the most common species found in the Great Barrier Reef they can be seen virtually everywhere. Small fish that are surprisingly territorial for their size, Damselfish are extremely diverse in terms of behaviour as well as coloration and typically stake out a designated “home” amongst the coral reef which they will then defend with their lives (often against predators much larger than themselves.) Depending on subspecies their diet consists of either plankton or algae, with the plankton eaters typically having brighter colours and the algae feeders being duller shades of orange and brown.