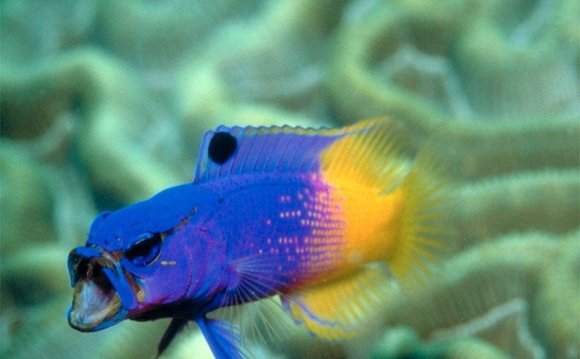 Next time you eat fish for dinner, consider that your meal is probably worth more money as a carbon capture and storage device.

By assigning a dollar value to carbon stored in ocean ecosystems, two recent scientific reports are attempting to make nations reconsider the true worth of their fishing activities.

The first, a new assessment backed by the Global Ocean Commission, roughly estimates that fish and other aquatic life in the high seas absorb enough carbon dioxide to avert $74 billion to $222 billion in climate damage per year.

A second recently published study found that each year, deep-sea fish swimming off the United Kingdom's and Ireland's shores capture and store a quantity of carbon emissions worth €8 million to €14 million on the European carbon market, or up to $20 million.

Scientists behind both reports warned that fishing and mining activities jeopardize the oceans' ability to provide the planet with a massive, all-natural carbon storage bank.

"Fish are actually really important in the global carbon cycle, and they've been rather neglected, " said Clive Trueman of the University of Southampton, lead author of the deep-sea fish study.

"I really think to use our oceans sensibly, we need to look at all the services that they provide and then find those that contribute to human welfare and well-being the most, and try to encourage that, " added Rashid Sumaila, professor and director of the fisheries economics research unit at the University of British Columbia, who co-authored the Global Ocean Commission report.

Sequestration in the briny deep
The first study, led by the University of Southampton in the U.K. and the Marine Institute of Ireland, sheds light on exactly how—and how much—deep-sea fish contribute to the ocean ecosystem's carbon-capture ability.

Phytoplankton, tiny organisms that make up the base of the ocean food web, absorb billions of tons of carbon dioxide each year. But because phytoplankton live near the ocean's surface, Trueman explained, much of the greenhouse gas returns to the atmosphere if it isn't eaten by marine organisms.

Huge populations of fish swim near the surface each night to eat phytoplankton, returning to the ocean's cooler depths during the day. But these species don't venture deep enough to lock the carbon within the ocean's depths for long periods. That's where ugly-looking, hard-to-study fish species that live thousands of feet below sea level come in.

By analyzing muscle samples from deep-sea fish species collected on the U.K.-Irish continental slope, Trueman and his co-authors found evidence that they swim up and dine on the migrating, phytoplankton-eating species more than previously thought.

"These big, bottom-feeding, predatory fish are basically capturing the moving animals and storing that carbon by killing them and keeping them at the bottom, " Trueman said. "It's only once the carbon fixed by phytoplankton actually gets below about 100 to 200 meters that it's not free to get back to the atmosphere."

"We really don't know very much about them, and yet they're doing something pretty useful for us, " Trueman said.

Is the service worth more than the fish?
The Global Ocean Commission report calculates that ocean organisms living in the high seas—waters outside the economic zones of specific nations—absorb 1.5 billion metric tons of carbon dioxide from the atmosphere each year.

Sumaila and his co-authors used the U.S. Federal Government Interagency Working Group's range of estimates for the social cost of carbon to arrive at their final mean value of $148 billion.

Given this figure, the report claims it may make sense to ban fishing in international waters altogether. The total value of fish caught on the high seas each year adds up to $16 billion.

The high seas make up about 60 percent of the world's oceans. However, these vast waters are managed by a complicated and largely ineffective web of international bodies, the report states. Fish stocks in international waters are overexploited and likely a drain on coastal fisheries, it adds.

As a result, nations attending the 2012 Rio+20 Conference on Sustainable Development charged the United Nations to come up with a better management plan for the high seas. This Global Ocean Commission report, which will be formally launched later this month, is intended to influence this process.

Sumaila said the $148 billion price tag is a ballpark figure and that the estimated range of $74 billion to $222 billion is very broad.

"Our estimates of carbon capture and storage in the high seas are preliminary and necessarily subject to a great deal of uncertainty, " the report states, largely because the mechanisms behind carbon transfer in the ocean are not yet fully understood.