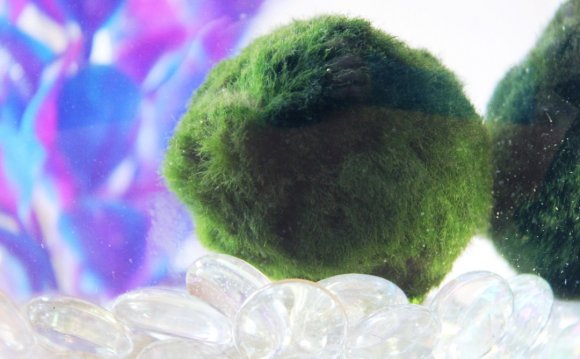 Live plants are very beneficial for aquariums. They do everything from absorb toxic nitrates to give your animals a natural, beautiful environment to live in. Unfortunately, not all of us have green thumbs. Over the years, I have struggled to keep live plants in my aquariums, even easy ones like Anacharis and Jungle Val, both of which have died on me.

So what’s one to do? Out of all the live plants I have had in my aquariums, there is one plant (well, sort of plant) that has not failed me: the Marimo moss ball.

The moss ball is not to be confused with cheap knockoffs (Java wrapped around plastic or foam spheres). Instead, Marimo moss balls are little squishy balls of algae that look a lot like moss, hence the name. In the wild, they roll along the bottoms of rivers, giving them their round shape. They are also viewed as charms in Japan, and even treated as pets.

Aside from its unique appearance, here are some benefits of having a Marimo moss ball in your aquarium.

1. Sucks Up Nitrates and Other Nasties

Byproducts of fish waste, nitrates are harmless to most healthy fish under 30ppm, but as their numbers increase over time, they can stress and kill your fish. Partial water changes are performed to keep nitrates in check.

Like live plants, moss balls absorb nitrates. But—also like plants—it’s usually not a large amount. The ball would make a difference only if it were kept in just a few gallons of water. Still, any nitrate absorbent is a benefit to your tank’s ecosystem. Moss balls are also like little filters, sucking up debris and small amounts of ammonia and phosphates.

Like plants in general, moss balls suck up CO2 and release oxygen in the water. If you don’t like noisy air stones, some Marimo moss balls are a great addition to help you oxygenate your tank.

What better way to combat algae than with algae? Marimo moss balls suck up the same nutrients as undesirable algae, depriving invasive algae of those nutrients. I had brown algae growing in my 10-gallon tank, but since wiping them off the glass and adding a few moss balls, they have yet to grow back. Of course, moss balls won’t make that much of an impact in larger aquariums unless you get more a lot of them. I don’t know about killing off algae, but they can help prevent unwanted algae from growing back.