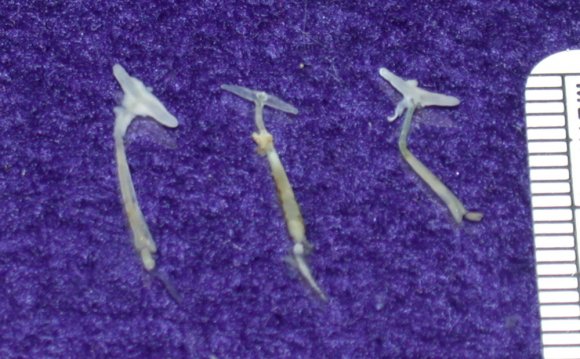 Almost all parasitic disease are similar and can be grouped into two groups- internal and external parasites. The most effective way of treating internal parasite infections is through medicated fish food. For external parasite, medicated baths are very effective. Baths of 10-30 minutes in 10mg of ptasium permanganate per liter of water works very well against fish louse, anchor worms, ergasilus, and flukes.

Symptoms: Scratches agasint decorations, white thread-like structures attached to the body.
Description: Anchor worm is similar to ich in that it starts out embedded in the fish's skin. After several weeks, the actualy worm emerges, lays eggs, and dies. The holes left from the worm allow bacterial infections to enter.

Symptoms: Scratches against decorations, clamped fins, visible disc-shaped parasites on body.
Description: This disease looks similar to ich in that the affected fish is covered in white spots, however, the spots on fish with argulus are much larger. Fish often become lethargic and stay at the bottom of the aquarium.

Symptoms: Scratches agasint decorations, white thread-like structures attached to the gills.
Description: Ergasilus is similar to anchor worm except it attacks the gills and is much shorter.

Symptoms: Scratches against dcprations, labored breathing, covered in mucous.
Description: Flukes are not area specific and can affect anywhere such as the gills, fins, or body. Flukes are similar to ich in appearance and the main way to differentiate the two is to look for any movement. Flukes, unlike ich, move around the body and have eyes when looked under a magnifying glass. This is a very deadly disease if not treated as soon as possible.