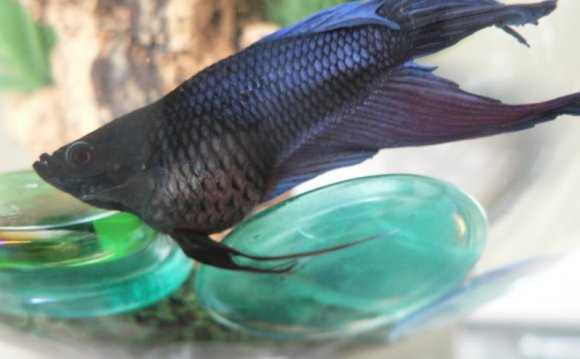 Diana has a betta that had a really bad bloating tumor. She said the following on 9/14/06:
"Hi, I just wanted to share with you what we did for our geriatric Betta Fish Valentine. We got Valentine 4 and 1/2 years ago, so I know he is at the very end of his lifespan. To top it off, he has had dropsy for the past 3 months and a tumor before that for about 6 months on his right side. I finally bought the clove oil to euthanize him as he just seemed so miserable on the bottom of the tank all day and all night long looking so uncomfortable and clamping his fins. He resembled that basketball goldfish you have on your website. He only came to the surface when absolutely necessary and never moved otherwise. He was still eating 2x a day though. I was all set to euthanize him when I thought, why not try to lance this thing and put him back into a clean tank? I used a #12 beading needle (most tiny needle I could find) sterilized with a flame and after he was under the clove oil I pricked him with it between the scales on the thinnest part of the connective tissue that was exposed from the swelling. This clear pinkish fluid came rushing out of him and it smelled of blood. I then put him back in his 2 gallon tank all freshly cleaned with Amquel and Methonidazole to fight any wound infection. It has been a week, and he is just fine! He was a little shocked at first when he came to, but immediately started to swim around freely and happily. His side looked a little baggy for a day or so, but now looks back to normal and his scales are all flat again. I plan to continue the antibiotics for a few more days with daily tank changes. I think he is going to make it. Or at least the tumor/dropsy won't be what he ends up dying from. I swear he looks like he did as a young fish and was very happy to get into his cave again since he hasn't fit in there for quite a while. I just thought I would write to you as I couldn't find anything on the Internet about what we can do for tumor and dropsy in Bettas other than euthanize or antibiotics and Epsom Salt (which didn't work).

The only sign that he even was sick is that his right front fin is a little larger and angled funny from being pushed out during his months of being swollen." She later wrote to say that the swelling was returning. Here is a before photo on the left from about May 2006 and an after photo on the right from September 2006.

Iain sent these photos on 4/1/07 of his five-year-old goldfish with a strange black tumor on his head. I myself am not sure what it is. It could be viral in nature. If you have information that I can pass on to Iain, contact me. Thanks.

I had a goldfish with large tumors on its head that mostly laid on the bottom for the last year of its life. I finally found the poor guy deceased on 6/10/07. I took photos to show the tumors which felt hard. The tumors were more white when he was alive. Note that he had been dead a few days so if you do not like to look at dead animals, please do not click on the photos below.

Mike sent these two photos on 4/10/07 of an orange goldfish in his pond with a strange white lump on it. It looks like it might be a fluid-filled cyst.

Jessica sent these photos of a goldfish with a white lump on 1014/07. This growth also appears to be a cyst.