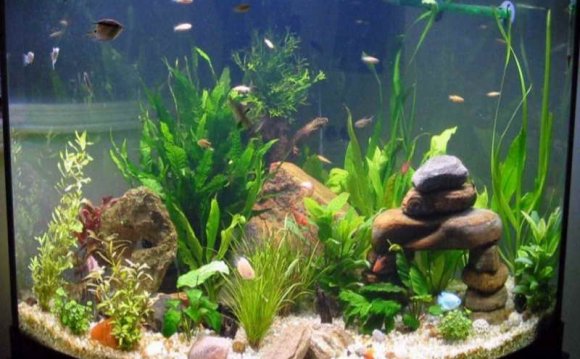 When you become the owner of pet fish, you have to make detailed preparations in everything from diet to living arrangements. Many aquarium fish are highly incompatible with each other. If you want to keep Siamese fighting fish (Betta splendens) in a community tank, make sure that all of the other residents are mild-mannered and docile.

Numerous female Siamese fighting fish specimens can generally do well in community tanks made up of others of serene dispositions. The females are usually fine together, but if they're not, you have to split them up. It's also important to avoid allowing the females to reside alongside other fish that have tendencies of biting fins. Siamese fighting fish in general are often equipped with elongated fins, and because of that are frequently the targets of fin-hungry types, notably various barbs and characins.

Some of the aquarium fish that Siamese fighting fish usually thrive with the most are catfish, danios, corydoras, angelfish and tetras. If they all live together in a tank that features ample plants, you just might find success. Refrain from housing Siamese fighting fish with barbs or characins. Also don't house them with gouramis. Tiny neons and babies in general also are a bad idea, as Siamese fighting fish often take it upon themselves to make meals of them.

Male Siamese fighting fish are extremely territorial creatures, both out in nature and in captivity. The females are typically nowhere near as focused on monitoring turf as the males. Scuffles between Siamese fighting fish out in their native habitats sometimes last for as long as 15 minutes. When you place Siamese fighting fish in tanks, always consider how much individual space they can get. The more room they have to themselves, the less frustration and anxiety they'll feel. Less anxiety and frustration often lead to minimized truculence, which is definitely a good thing.