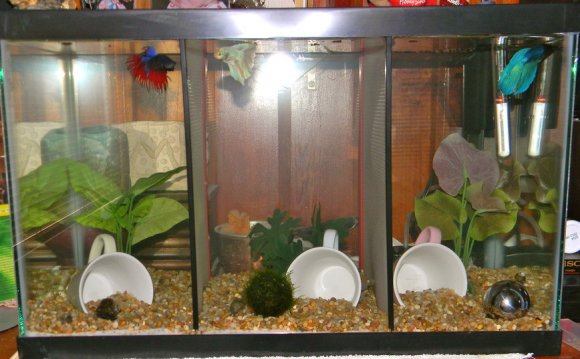 Betta fish (Betta splendens) are one of the most popular fish species available today and male Bettas are widely appreciated for their wide range of beautiful colors and many fin types. Female Bettas, however, are a lot more difficult to find in the hobby and overlooked by most aquarists. They are often thought of as ‘dull’ compared to their male counterparts – even though their colors can be just as lovely and there are actually a few advantages to keeping females.

Keep reading for everything you need to know about identifying female Bettas and why you might want to consider them over males!

Note: There is a lot of inaccurate info on Betta keeping out there. Bettas should always be kept in an aquarium of at least five gallons. If you’re interested in keeping Bettas, be sure to have a look at the full Betta caresheet.

Figuring out whether a Betta is male or female can sometimes be a little difficult, especially because they’re often unlabeled or mislabeled in pet- and aquarium stores. Female Bettas are short-finned so if a Betta has very long finnage it’s almost certainly male (with some exceptions), but what about short-finned (plakat) males? Here’s what you should be looking at if a short-finned Betta is causing some confusion:

Keep in mind that female Bettas can be very similar to males: don’t just rely on one item on this list, be sure to check all of them. Sexing young Bettas can be especially difficult, so you might want to double-check once the fish has matured.

For hobbyist fishkeepers, keeping female bettas is often not the first thing that comes to mind. Males are thought of as more attractive with their often extravagant finnage, whereas females are seen as boring or bland. In reality they are just as active and fun to watch as their male counterparts. They will still flare, explore their aquarium and eventually recognize their owner.