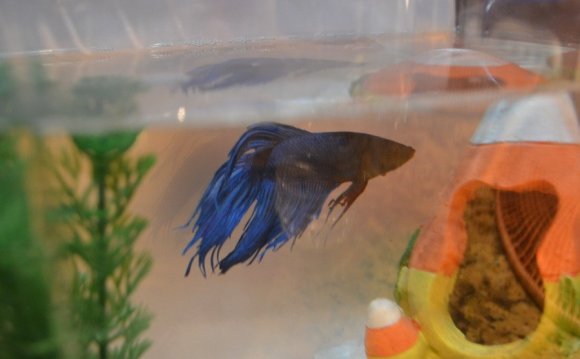 Siamese fighting fish, commonly known as betta fish, are brightly colored small tropical fish. Males are the more vivid in color, while females coloration is subdued. Sometimes bettas change color. A betta fish may change color for a few reasons, among them stress, illness and age.

The most common reason for bettas to lose their coloration is stress. Pet stores often house them in small containers, packing the fish side by side on tiny shelves. Fish in these small containers will appear dull and subdued, with pale coloration. Select a tank that holds at least 1 gallon of water to prevent excess ammonia buildup and give your fish plenty of room to swim. Bettas are a tropical species, and your tank should have a small heater to keep the temperature in the mid-to-upper 70 degrees Fahrenheit. Keep male bettas in separate tanks to prevent fighting. Female bettas are more passive and thrive in community tanks with a variety of fish.

A great indicator of illness in bettas is a change in color. Fungal or bacterial infections often leave patches of fuzzy-looking or discolored spots along the body of a fish. A complete water change along with routine fungal treatment should eliminate infection. Ich is another common disease; it appears as white spots along the body and fins. Ich can be fatal if left untreated, but an increase in water temperature combined with ich medication will clear up any lasting infection. Velvet also causes a change in color and can be fatal if left untreated. Velvet coats the gills and scales in a slimy yellow or brown film. Treat velvet with aquarium salt and a water treatment product, and do so as soon as you detect symptoms to save your fish.

Much like graying hair in mammals, bettas often lose some of their vivid color as they age. The average life span of a betta is between two and five years, although with proper care healthy fish can live longer. Bettas are nearly translucent when they’re born, with their first noticeable color coming in as they. The color generally intensifies until the fish is approximately 2 years old. After that point, the fish may begin to fade to a duller shade, particularly around the mouth and gills.

Marble coloration in bettas is a result of a mutation known as a “jumping gene." This gene is able to move between the fish’s chromosomes, resulting in an ever-changing color pattern. Marble bettas are just as healthy as fish without the jumping gene but may experience a variety of color changes throughout their lives. Some marble fish start out solid turquoise only to end up a few weeks later with a red-and-white butterfly pattern.