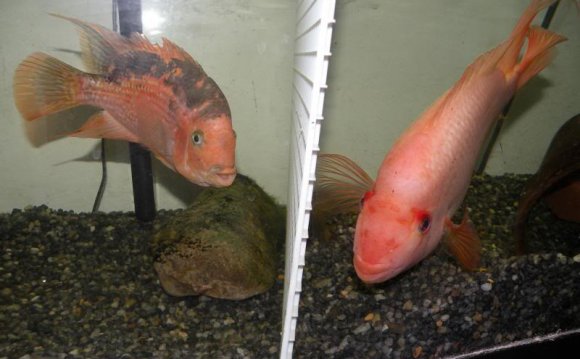 Late in 2001, I was in one of the super-dooper pet stores looking for crickets since our local, privately owned pet store went out of the "Cricket Biz". While I was waiting for the clerk to count out a dozen crickets, I wandered around looking at the fish. In one tank, I spied what appeared to be a large Betta dart up to the surface for air. It quickly darted back to the large decoration on the bottom of the tank. A quick glance at the label on the tank told me what it was: a "Giant Ugly Betta". From the quick glance that I got it appeared that it was some type of larger wild Betta species, I guessed
probably B. pugnax.

When the clerk finally returned with the 12 crickets, I told him I wanted that Betta. He pointed out that there were some beautiful male Bettas in the display over on the other side of the department. He couldn't understand why I wanted that big, ugly thing. When he moved the decoration, there were five more - males and females, all three to four inches long! I told him I wanted them all, after all, they were only $4.00 each. He looked at me like I was crazy, but bagged them up for me.

When I got home, I looked at them more closely. They appeared to be a pugnax-type Betta wherein the males have a long, pointed tail; but NOT like the pugnax I had seen before. And, even better, one of the males had a dark blue head and appeared to be holding eggs! I put them into a 50-gallon tank that was empty, and, since things were so crazy at work, I forgot about them except at feeding time. I expected the male that was holding to eat or spit the eggs, especially since he had just been netted and moved. He was up eating with the rest of the fish the next day, so I figure that is what happened. I never saw any fry in the tank and became too busy at work to worry too much about them. Aside from the coloration of the holding male (a bright blue head with a black stripe from eye to eye) they all remained a plain red-gray color. I added a dozen plastic flowerpots for hiding places.

Several weeks went by, and two males turned up dead, looking like they had lost a heavyweight fight. I checked the water parameters - nothing amiss there. I figured maybe there was some aggression going on, after all they are Bettas. I added several clumps of Water Sprite and a clump of Java moss, did a 50% water change, and pretty much forgot about them again.

A few evenings later, I caught a flash of color when I was feeding the fish. Upon closer inspection, there was a beautifully colored male dancing a
round with a dark colored female in one of the flowerpots! The male was gorgeous. The entire body had grown a handsome dark gray-brown. His
fins were outlined with a wide electric blue band, which was further outlined by a narrow black line, tipped in white. His long, pointed ventral fins were bright blue-white. His head was bright green-blue with a black band running from eye to eye through the lips. There were several other black lines and blotches all over the head and body. The female had grown dark, almost a chocolate color, but though she had some of the body base color in the fins, she had no color to rival the male.

The female was obviously in control. As the male waited in the flowerpot, she approached him when she was ready for him to embrace her with the typical Anabantoid embrace. In between embraces, she would chase off the other two Bettas, who kept coming closer to watch. There were several "false embraces" with no eggs released. Then they got down to business. As they completed the embrace, she released a few eggs, and the male shivered a little bit (I assume he was releasing his milt to fertilize the eggs). While the eggs fell towards the bottom, the male swam down and began to pick them up one by one. The female floated upside down in a daze for 10 - 15 seconds, then righted herself and went to chase the other fish. After several embraces, she began to help the male gather eggs. She picked them up and spit them at the male, who caught them in his mouth. Amazingly, though this fish is over twice the size of Betta splendens, their eggs are exactly the same shape, color and size as B. splendens - a slightly flat oval, whitish creamy color about 1.5mm in size.

I would estimate that in a little over an hour, they had laid and collected about 100 eggs, maybe a few more. The spawning ended with the male refusing to take any more eggs as the female spit them at him. She made a few attempts, then swam off, leaving the male in the flowerpot by himself. I could see that he was "chewing" the eggs, rolling them around in his mouth as he was breathing. But his head did not look swollen, like so many other mouthbrooders do when they are holding eggs or fry.

Over the next few days, he spent most of his time sulking in a flowerpot or hanging in the Water Sprite near the surface. After four or five days, he was eating normally with the other adults, and I saw no fry. I assumed that he had eaten the eggs. Oh well, back to the drawing board!

A couple of weeks went by, and while I was doing a water change I noticed that there were several smaller Bettas about a half-inch long coming out of the plant thickets to see what was going on! The spawning had been successful! Since the first spawn I witnessed, they have spawned several more times. Each time the male is up and eating within a day or two of the spawn, even while the eggs are still in his mouth. So don't let this discourage you.

From subsequent spawnings, I have observed that the fry will take baby brine shrimp upon release about 9 or 10 days after spawning. They also graze upon the microfauna on the plants. The fry grow quickly, and start making their first breeding attempts at about 2-1/2 inches when they are around 6 months old.

Normally when you think of a Betta, you think warm, acid water, right? Well, with most of the mouthbrooders, and Betta enisae in particular, the truth is just the opposite. Most of the mouthbrooding Bettas come from moderately flowing streams. That may be one of the reasons why they have developed mouthbrooding - it's too hard to keep a bubble nest together on a stream! Betta enisae in particular comes from a cool mountain stream in the Indonesian State known as Kalimantan...