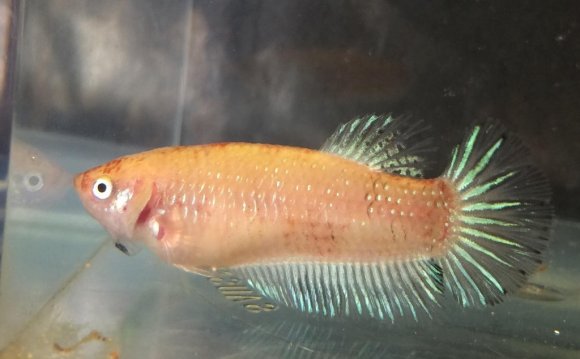 This article is a bit dated and there are a few more current articles found here: By Karl Baumgarten
London Aquaria Society, Ontario, Canada. May 2001
Aquarticles

The Siamese Fighting Fish originated in Thailand and Indonesia, where it lives in swamps and rice paddies. The original betta doesn't have the long, colourful, flowing fins and thin long body of the fancy type, but instead has a short, stocky body with fins like a female betta, with red, green and blue being the predominant colours. The wild types are more aggressive and have more muscle than that of the fancy type.

The betta can be a very peaceful fish, but is considered aggressive for two reasons:

The betta, in my opinion, is one of the easiest first fish to keep, because they don't require a huge tank with an expensive filter, and they don't need to be fed expensive foods. The betta requires a small container (bowl or jar), likes to be fed once or twice a day and likes the water to be changed every four or five days, and that's what makes it such a good beginner's fish. It doesn't require a lot of intense attention and care.

I have been breeding bettas for about a year and a half, and have had about ten or so successful spawns. It first started with a trip to the Local Pet Store (seems it always starts this way!) when I left with a pair of red/blue bettas, a ten gallon tank, a filter, food and a book on the care of the fish. Suffice to say, they didn't survive long, and I never got them to breed. I continued to buy more from the pet store and finally got a couple of spawns to take place. I went on the Net, did a bit of searching, and had a couple of shipments of IBC (International Betta Congress) quality bettas sent to me. I started breeding them, and to this day, I breed and show my fish and have won many CAOAC awards for my bettas. (They love me, they really love me!!).

I will now explain various tail types and main colour variations of the bettas:

Tail Types
Veil tail: This tail type is the most common and what is usually found in pet stores. The gene for Veil tail is dominant and is very hard to breed out of a line. The tail is long and thin and usually tapers to a point. Delta tail: This is where the tail is in the shape of a delta coming off of the caudal peduncle. The spread is measured in degrees and can vary from 50 degrees to 70 degrees.

Super Delta Tail: This is a wider form of the Delta Tail and the spread of the caudal fin is usually from 70 degrees to 120 degrees.

Ultra Delta Tail: This is an even more glorified version of the Delta Tail. The caudal fin spread is usually between 120 degrees to 160 degrees.

Crowntail: This is the newest and most expensive tail type to date. This type shows the fins rays extending past the webbing of the fins.