What is a Half Moon Betta fish? 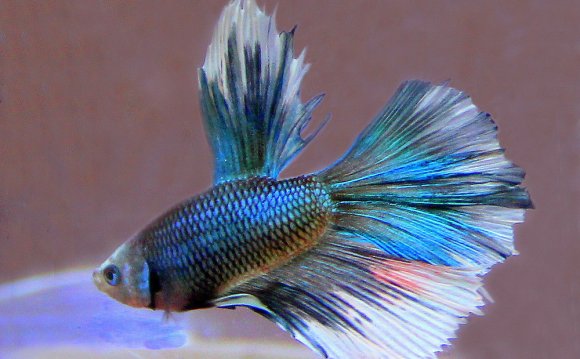 The betta fish is known for its incredible beauty and its warrior-like personality, but there certain facts about this fish that make it a fascinating pet. Delve a little deeper into this fish's world and learn a few of its secrets.

Fact One: Bettas Breathe Above and Below the Water

Unlike most fish that only breathe by collecting oxygen from the water through their gills, the betta can breathe below the water's surface as well as from above it. Bettas have an organ called a labyrinth located just behind their heads that allows them to breathe air. They can rise to the water's surface and take a gulp of air, and then swim back down as they please.

In the wild, bettas live in very slow-moving waters with less-than-ideal amounts of oxygen. The labyrinth evolved to help these fish collect enough oxygen to survive. Of course, bettas still need to live in the water even if they can breathe regular air.

Bettas will pick at almost anything you feed them, but they primarily need protein. You can keep a pet healthy on a main diet of betta pellets, but your fish will also appreciate the occasional meal of live or frozen brine shrimp and freeze-fried bloodworms. Feed your pet daily, but no more than three pellets at a time, and any other remaining food in tank must be removed after five minutes. Bettas are prone to constipation, so some hobbyists recommend that you let your betta fast one day a week.

When you visit an aquarium shop, you'll notice that bettas are mainly displayed in small, individual containers. If you see one in a community tank, it's most likely the only one of its species. That's because bettas are highly territorial toward one another, and they will fight all the way to the death to defend their territory, if necessary. They don't appear to be quite as territorial toward other species, but they will still nip their tank mates occasionally.

Females are territorial, but not quite so fiercely territorial as males. For this reason, you can keep them in what is referred to by hobbyists as a sorority tank. It's recommended that the group is no smaller than five females, and the tank must provide at least a minimum of one gallon of water per fish. It's best to introduce the females all at the same time. They will have a number of spats over the first 24 to 48 hours until they determine their individual territory, and then they tend to settle down. Any fins damaged during these skirmishes typically heal in a few weeks. Make sure the tank has plenty of plants to provide the girls with places to have a quiet retreat.

Bettas are egg-layers as opposed to being live bearers, and it's amazing to watch the courtship that goes on between a male and a female prior to fertilization. Love actually looks more like a battle, at least in the beginning, since males and females will fight with each other when forced to share the same territory.