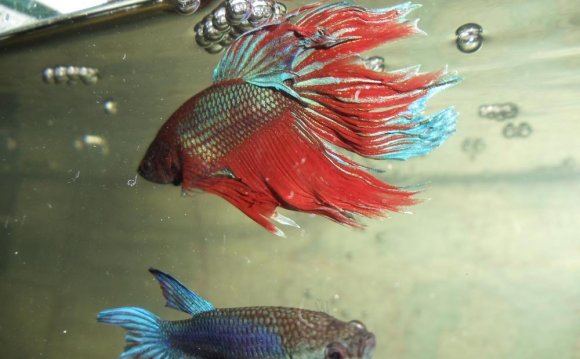 In the past few years, I have often heard about the fighting fish in the north east area of Thailand we call Isan. My plans to visit Isan country were canceled many times because of my busy business life. A tragedy occurred when my time was freed up in the last quarter of the year, but unfortunately the fish fighting games were already over for the year. The fish fighting games begin every year in March and end in September, the rainy season or rice growing period. After a few discussions with a friend I came into contact with through ICQ, I immediately set up plans to visit Isan country and experience Betta smaragdina fighting during the month of August 2000. The following is a refined story of the exciting experiences I had while observing Plakat Thai in Isan country, the land of our richest ancient cultural heritage.

The terms Plakat Thai and Siamese fighting-fish both have the same meaning. The only difference is that Plakat Thai is the Thai word for the Betta and Siamese fighting -fish is the English word for the Thai Betta (Plakat = biting/fighting fish, and Thai = Siamese). Plakat Thai can be classified into three Betta species: Betta splendens, Betta smaragdina, and Betta imbellis. Betta splendens are the most famous and also the most in demand among the three species. Amazingly, in the past all three species were developed by Thai farmers to be fighting fish. No one can tell which species came first. I believe that all three species were developed along with each other locally. These three species were interbred in a pyramid pattern with the Betta splendens at the top of the pyramid.

This was done through fish fighting activity, which plays a very significant role in the interbreeding choices of these three species we call Plakat Thai.

There are very few breeders in the uppermost northern part of Thailand. Geographically the north is comprised mostly of complex mountain ranges and highland plateaus. The weather there is slightly cold throughout the entire year, and as we know cold weather is no good for breeding Bettas. There is a short sunny period from March to May. Wild Betta splendens and Betta smaragdina can be found in the rice fields and the surrounding areas. However, there are many more breeding areas in the lower parts of the north, geographic basins and river junctions from the north provide stable temperatures and fertile soil suitable for cultivating live food for the Plakat Thai. These are the most essential factors of successful breeding and maintaining good stock.

The northeast part of Thailand favors Betta smaragdina, especially the provinces that are connected to the river Khong, at the Thai/Lao border. These breeders preserve the tradition of fish fighting as a joyous after- work activity. There is no reason to breed for commercial purposes, or if any very few do. The fish are caught in the wild and exchanged among close friends. The fish are freed back to the rice fields after the games are over.

Every province in the Central and Eastern parts of Thailand mainly stress development of long and short fin Betta splendens. Bangkok (officially Krung Thep), the capital of Thailand, is the center of all kinds of ornamental fish trades. However Betta splendens is a major part of Bangkoks aquarium fish industry.

In this section I will focus only on the Betta smaragdina, the first aquarium pet of the Isan people. Keeping, rearing, and fighting of the Betta smaragdina has a long history in Isan culture, and it involves a basic social dynamic that has been a part of Isan society for a very long time. The traffic throughout different Thai cultures eventually led to the interchanging of Betta bloodlines for breeding.

What is Betta Smaragdina?

One of the green fighting fish breeders I met in SakonNakorn province told me that fish fighting in Isan country may go back over 200 years. He was 53 years old. He said that his father had told him his grandfather was a big player in the fighting fish game. From his personal opinion, fish fighting may have come along at the same time as cock fighting or possibly even before that. In order to validate his opinion he said that Thais today and in the past have always had a close relationship with the water. We are a riverside society. Over 80% of Thai people were farmers, so naturally their lives are very close to nature. They grew rice and caught fish for food; children ran around playing and also caught the small fish in the rice fields. So it is possible that we knew the fighting fish before the fighting cock. This answer is very...