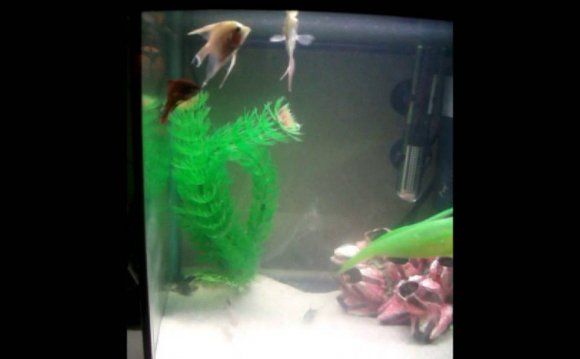 There were 20 subjects, each of which interacted twice with the same male for 10 min on each occasion. One interaction was in the presence of a female (audience), the other was in the absence of a female (no audience). Two hours separated the two interactions. The order of these interactions was balanced over the experiment (i.e., each type of interaction was the first to be presented on an equal number of occasions). Each male acted as a subject in one trial (i.e., two interactions) and also as the other male in a trial with a different male.

For the trial with an audience, males were allowed to see the female for 3 min before the male-male interaction began. Males immediately began displaying to one another through the transparent partition after the opaque partition was removed. We measured the following displays of the subject from video recordings: time with erect gill cover, number of bites, number of tail beats, and time at less than one fish length to the partition separating the two males. We analyzed these behavioral measures with Wilcoxon matched-pair signed-ranks tests.