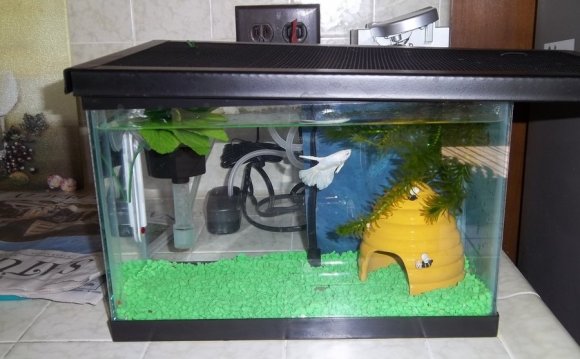 Did you ever wonder how your Betta lives and moves in the water?

Bettas, functioning like all other fish species, extract oxygen from the water through their mouths and gills. It is during this process that the fish can breathe while eliminating carbon dioxide and waste products. Bettas acquire nearly all of life-sustaining oxygen through this method and without it, in a matter of minutes, the fish will die. However, the Betta adjusts well to a more confined environment because it needs less oxygen than some of its fish cousins.

How do Bettas float?

Unlike land animals, the water that surrounds Bettas provides most of the buoyancy and support for them to stay afloat. If you look closely, you will notice their elegance as they glide through the water. This is because of their large and graceful fins. Their strong tail fin provides most of the propulsion.

How do Bettas see?

Bettas’ eyes function similar to humans in their orientation to light. They adapt to any light source that hits their eyes, as being “up”. If you want to conduct an interesting experiment, shine a flashlight into the tank. What you will notice is that the Betta will swim sideways so it can always keep the orientation of the light to “up.”

Bettas see with what is called monocular vision, which means that each of their two eyes, located on each side of their head, sees a unique and different image. Since it is difficult for Bettas to focus both eyes on one object, they lack depth perception. Because of this, they can only focus on objects that are no more than 12 inches away.

Bettas don’t actually “sleep” as we understand it. Because they don’t have any eyelids, they rest or “nap” with their eyes open. You will notice throughout the day your fish lying on the bottom or just floating in the water. It’s during these times that your Betta is resting.

How do Bettas hear and taste food?

Every Betta hears through one single chamber but because sound travels much quicker through water, it allows them to hear very well. Likewise with taste, these fish are very dissimilar to humans in how their senses operate. The Betta’s taste buds are located on its fins, lips and mouth. Similar to other species of fish and animals, it recognizes smells through its nostrils.