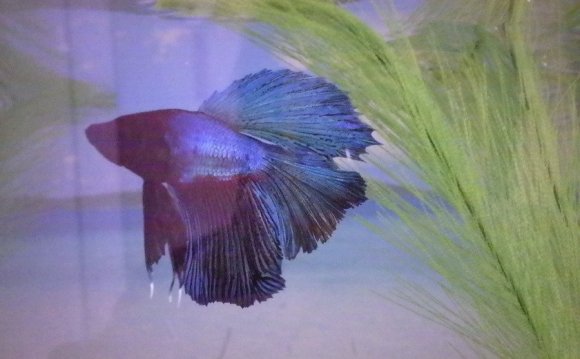 Most aquarium ornaments have rounded edges to discourage fin damage.

Damage to a tail can look dramatic and painful, but the fact is, most fish heal from tail and fin injuries just as you do from a cut. In most cases, fin damage doesn't faze a fish. Nevertheless, it's good to know the signs of complications to injured fins so you can intervene if you need to.

Fish can get hurt a number of ways. Handling them in a net can rip their fins or tails. They can hurt themselves on sharp-edged aquarium decorations. Aggression from other fish, either fighting or fin-nipping, can cause fin injuries. A damaged fin or tail typically manifests as a clean split or a bite-size piece missing. Such injuries don't seem to bother fish unless they're recurring or cause complications like fin rot.

Fin rot's a condition whereby bacteria attack a fish's fin or tail. Fin rot almost always occurs as a secondary infection. This means the bacteria that cause fin rot, which are everywhere, can cause infection only if the fish is already sick or injured. Fin rot eats away at a fish's fins and will often destroy the fin all the way down to the base. Fin rot manifests as a ragged, fuzzy edge to the damage fin.

It might be hard to look at a tailless fish, but unless you see fin rot, the best course of action is to let a fish heal on his own. If you see signs of fighting, you may want to separate fish; beyond this, just keep up on your water changes and feeding, and let the fish heal. However, at the first sign of fin rot, you need to intervene. One way to treat fish rot is with antibiotics or aquarium salt. Different species of aquarium fish have different levels of tolerance for aquarium salt and antibiotics, though, so find out about your particular specimen to make sure it can tolerate them before treatment.

In most cases, fish will regrow their fins and tails, often looking just as good as the originals in most cases. However, if you let fin rot go on too long - and it does progress quickly - more serious infections can set in and kill the fish. Usually if you treat fin rot before it completely eats away at the tail or fin, the fin will grow back normally. Most fish and grow their extremities back quickly and completely if they're in a clean fish tank.