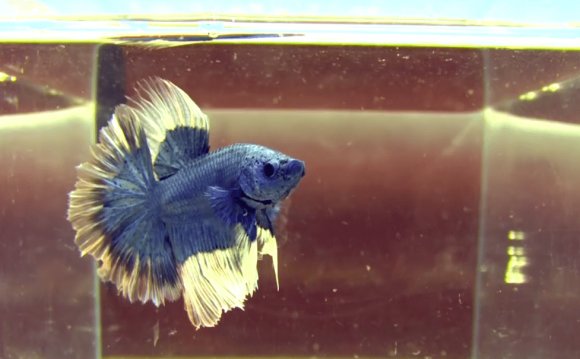 The usual 'first fish' for a new fish-keeper is the goldfish. Unfortunately this is often the 'first mistake' as well. There are a number of cold water fish much more suited to aquarium life and easier to care for than the goldfish.

Why not just use Goldfish for your coldwater tank?

Goldfish, contrary to mainstream belief are not at all suited to small aquaria - they grow too large (35cm 14"), they are boisterous, messy feeders and will eat plants. How about the fancy varieties? Well, these deformed fish come with a whole host of problems and most end up floating/sinking with swim-bladder difficulties or damaging themselves by getting stuck/scraped/torn on benign aquarium objects.

We have great pride in the fishkeeping community whenever there is outrage against the latest 'designer fish', artificially died fish or man-made hybrids yet fancy goldfish, which have more physical handicaps and malformities than any fish still manage to get by un-noticed. So this might be a bit controversial but we will say to all who listen - don't keep goldfish in aquaria less than 120cm (4 foot) long and quite simply, don't keep fancy goldfish.

All is not lost however; the conditions in suitable unheated aquaria are perfect for a whole host of fish that are easily available in virtually all aquarium stores. Firstly, lets define 'suitable aquaria' - anything less than 15litres capacity (30x23x23cm 12x9x9") is best used as a vase, to collect drips from leaky roofs, or left to the experts. Very few fish can be properly kept in an enclosure this small without considerable knowledge of water quality and a good idea of the fish's natural environment. An aquarium measuring 60cm (2 foot) would be a better starting point and will cost little more than an aquarium half the size. Filtration is also an absolute must; no fish can be kept properly without a good stress-free waste removal system.

What is a cold water fish?

True 'coldwater' fish are hard to come by nowadays due to heavy restrictions aimed to avoid the introduction of non-native fish into our local waterways where they could do considerable damage. In most cases our unheated aquaria are kept at room temperature (18-20C), which is classed as sub-tropical or temperate.

At this temperature there are many fish, usually sold as tropicals, which will thrive and often do better than if they ended up in a heated tropical tank.

These temperate fish come from areas in nature that are either sub-tropical or experience fluctuating temperatures throughout the year such as high altitude streams or waterways fed by meltwater. The fluctuating conditions in these areas have caused the fish to develop a tolerant and hardy nature, making them ideal fish for smaller aquaria or for new fish-keepers.

The popular Guppies and Platies are not what they once were and the varieties offered for sale are not suitable for unheated aquaria, nor are neons or mollies. One exception is the variatus platy Xiphophorus variatus, which to the untrained eye is indistinguishable from the normal platy although they often display more defined markings and a slender body. The variatus platy is perfect for most unheated community aquaria being small, peaceful, hardy, active and colourful.

The smallest of the common temperate fish are the popular white-cloud mountain minnows (WCMM's) Tanichthys albonubes and the zebra or leopard danios Brachydanio rerio both these fish are hardy shoaling species and should be kept in groups of six or more. These two fish will constantly zoom around the aquarium so are best given plenty of open swimming space with hiding spots in plants and decor around the edges of the aquarium. Because they are so active they are best kept with other active fish that will not become stressed by constant movement.

Thankfully many temperate fish fall into this category, most notably some of the barb family including Rosy Barbs Puntius conchonius, Golden Barbs Puntius semifasciolatus, Odessa Barbs Puntius ticto, and the slightly larger arulius barb Puntius arulius. Rosy, Golden, and Odessa Barbs will all grow to a few inches and will develop colourful and distinctive markings.

These fish are also best kept in groups and will constantly have little bouts displaying to each other, adding to their character and appeal as aquarium fish. The Arulius, or Longfin Barb is a long-standing favourite fish of mine despite its initial drab appearance. Once these fish have been settled for a few months they will develop long dorsal fins and a multitude of mixed iridescent colours and markings along the body. The Arulius Barb is active, grows to around 10cm (4") and is best kept in small groups so ideally; a 90cm (3 foot) aquarium is a minimum. When fully grown, the arulius barb will be large enough to eat White Clouds or small danios, whether it could catch them or not is another matter.

A few fish in the characin family are also suited to temperate conditions and the two most easily available are the Buenos Aires Tetra Hemigrammus caudovittatus and the Bloodfin Aphyocharax anisitsi Both these fish are again shoaling species and are relatively peaceful although they may be a little nippy with long-finned fish.

On the subject of long-finned fish, one which stands out as a temperate species is the beautiful Paradise Fish Macropodus opercularis These anabantoids will grow to 10cm (4") and are active and relatively peaceful with the exception of the males which will fight until the losing fish becomes reclusive and often dies. A group of one male and several females can be kept together in an aquarium with plenty of swimming room and hiding spots. Unfortunately, Characins and Odessa, Rosy, and Arulius Barbs do not make good tankmates for the Paradise Fish as they are likely to be either too boisterous or nippy.

For the lower reaches of the aquarium, the popular Bronze, Peppered and Albino Corydoras sp. are well suited to cooler waters providing the substrate has no sharp or jagged elements. These fish are best kept in groups and they will require their own food source from sinking pellets or frozen/live foods.

The Port-Hoplo Catfish Megalechis thoracata, syn: Hoplosternum thoracatum can also be kept in temperate conditions and there are few fish with as much character as this one. Because the fish has very bad eyesight and depends on its other senses to find food it will simply charge around the aquarium investigating everything it finds, often in a comical manner. These active catfish can reach 15cm (6") so a larger tank is essential.

With all these interesting and unusual temperate fish easily available there really is no need for our favourite goldfishes to remain imprisoned in small aquaria. So, on behalf of goldfish, set us free, there are plenty of willing volunteers to take our place.

Hello do you have a question about tropical fish care? Do feel free to ask our experts.We have 1000's of posts about the very topics you're interested in covering all aspects of tropical fish; their habitats, best ways to keep them thriving, where to buy, from whom and more! Hope to see you soon in the upgraded Tropical Fish Forumsoon
Source: www.thinkfish.co.uk